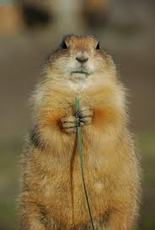 Prairie dogs live in underground burrows, extensive warrens of tunnels and chambers marked by many mounds of packed earth at their surface entrances. They are rodents and live in aggregations called towns or colonies
This is one endangered species int the Grassland biome. Five species exist, and and all have declined as a result of human settlement on their range. This animal is classified as an endangered species because they may be shared by snakes, burrowing owls, and even rare black-footed ferrets, which hunt prairie dogs in their own dwellings. These animals are protected by the Endangered Species Act.Its ecological niche are as herbivores. 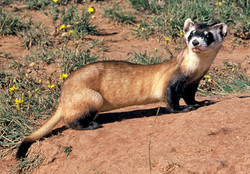 According to U.S fish and wild life service , black-footed Ferret likes to eat prairie dogs for a while, no one knew whether this species had become extinct. It is still alive, but is very endangered. A ferret is a small predator of the prairies, where it feeds on Rodants and mainly Prairie dogs.This animals is also protected by the Endangered Species Act because they help control populations of prairie dogs, which are sometimes seen as pests because of their burrowing activities and because they as as reservoirs for zoonotic diseases such as Bubonic plaque.